The Skytap automation pack for Visual Studio Team Foundation Server (or TFS automation pack) enables easy integration of your Skytap environments with TFS to run Continuous Integration and Automated Testing workflows using Build-Deploy-Test (BDT) concepts in TFS. BDT is the workflow engine that ships with TFS that enables a developer or tester to:

Once defined, this BDT workflow can be repeated multiple times by members of the development team.

The automation pack is available for download here. For instructions about installing and using the pack, see below.

This article does the following:

There are a few prerequisites you must have to run a Skytap-integrated BDT workflow, as listed below:

You need to have TFS 2012 installed. This can either be on-premises or in Skytap itself. For the purposes of this article, we assume TFS is installed on-premises. As part of TFS install you should have the following components of TFS also installed:

For your TFS server to communicate with test environments in Skytap, you should have a VPN connection to Skytap configured. For more information, see Vpns and Private Network Connections.

If you have TFS installed in Skytap itself, then you don’t need a VPN. Connection between TFS and test environments in this case is created using ICNR. For more information, see Networking between environments.

The automation pack enables you to employ Skytap in your BDT scenarios. You can download the pack here. The pack has 2 components:

You can override these credentials when you define the BDT.

You designate the Skytap template as the test environment for your application. Each run of a BDT creates a fresh environment out of this template and performs tests against it. To prep this environment, you must perform these two steps:

Once the prerequisites are in place, your on-premises infrastructure look something like the figure below: 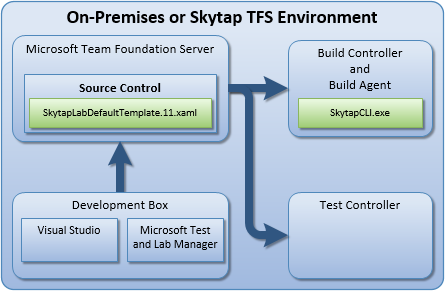 How to set up your test environment

This step is needed so that the required agents can be installed and other tweaks can be made to the test VMs, such that TFS can recognize them as VMs when BDTs are run. The relationship is depicted in the conceptual diagram below:

At this point you’re ready to create run BDTs.

Define a BDT in TFS

You may be familiar with the steps to create and deploy BDTs in TFS using Visual Studio and Microsoft Test Manager. We use the same steps to illustrate how to create and run BDTs using the automation pack under the hood.

A developer or tester can create a BDT definition based on the template provided as part of the automation pack. The only difference is that instead of using default lab template you use SkytapLabDefaultTemplate.11.xaml as the ‘Build process file’ . This template preserves the same UI and workflow as existing BDT templates. It also allows the user to enter the information needed for the integration. Here’s a brief description of Skytap fields that you can enter in this UI. Only two of these values are required.

You can set up the BDT to be executed as part of any check-in, or trigger a build manually. In this illustration we have triggered a manual build that starts the associated BDT that we have defined. 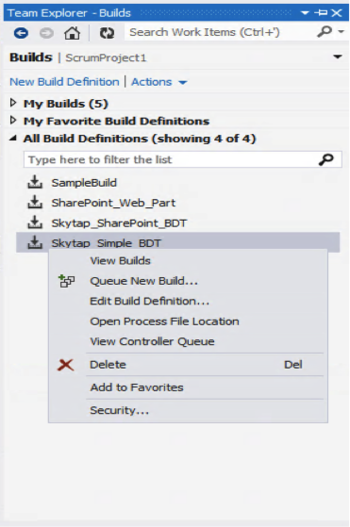 The build logs show the automation pack in action, where it dynamically creates the test environment in Skytap and uses auto-networking capabilities to connect to a TFS over a VPN connection. The screenshot of Visual Studio on the developers machine shows the BDT in action. 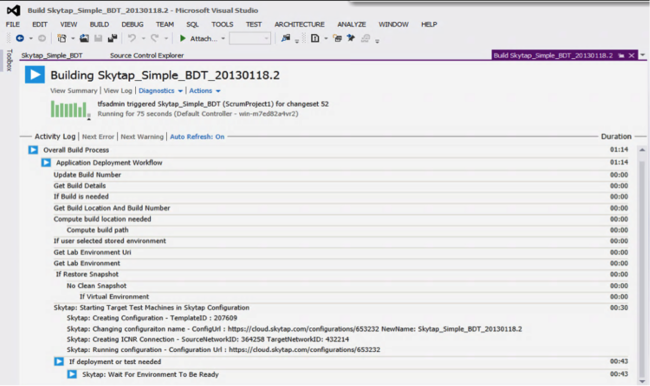 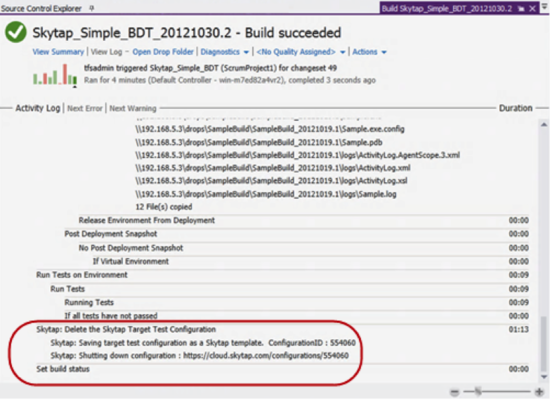 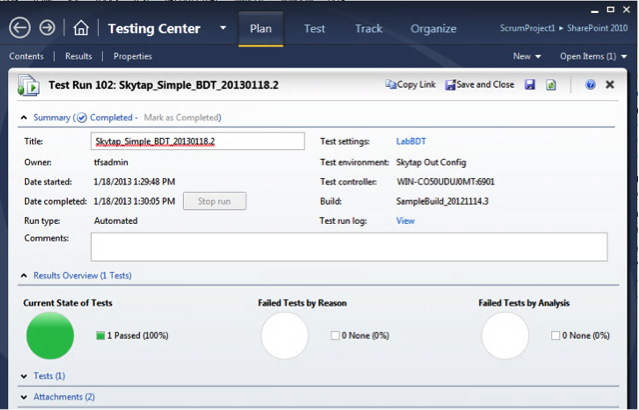 After the BDT run finishes, you can see the logs right in Visual Studio on your developer box and also see the results of tests and other diagnostic data you collected, in Microsoft Test Manager.

If you have any questions about these scenarios, contact support@skytap.com.